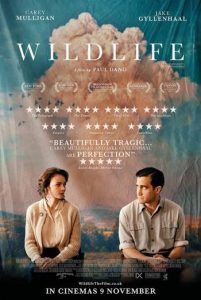 Fourteen-year-old Joe is the only child of Jeanette and Jerry — a housewife and a golf pro — in a small town in 1960s Montana. Nearby, an uncontrolled forest fire rages close to the Canadian border, and when Jerry loses his job — and his sense of purpose — he decides to join the cause of fighting the fire, leaving his wife and son to fend for themselves. Suddenly forced into the role of an adult, Joe witnesses his mother’s struggle as she tries to keep her head above water.

Based on the book Wildlife by Richard Ford

The tale itself is resonant and absorbing, though in a highly deliberate way. It’s about the energies that were bubbling up from the underbelly of the late ’50s.
Owen Gleiberman
Variety
The entire cast does exceptional work, but the movie is anchored by Carey Mulligan, who gives the best performance in any film I’ve seen this year.
Glenn Kenny
The NYTimes
An affecting coming-of-age drama based on a superb book and directed by an exceptional actor in his directorial debut.
Joe Morgenstern
Wall Street Journal
https://www.youtube.com/watch?v=OoJpVQTY_t4