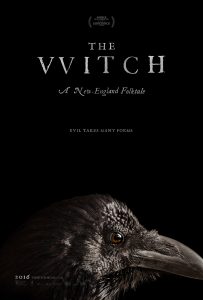 There’s a scene towards the end of the 2016 horror film The Witch that is so disquieting that the act of mentally recalling it still makes me squirm in my seat. It’s not gory. It’s not even particularly shocking. Rather, it evokes a deep kind of existential discomfort, one that is far more terrifying than a cheap jump scare could ever be, and it’s all the more effective because it’s in service of a good story. It’s delicious filmmaking.

The directorial debut of a former production and costume designer, Robert Eggers, The Witch is the tale of a Puritan family in 1630s New England banished from their settlement and sent packing to the edge of the untamed Northeastern woodlands. There, they build a farm, and things quickly deteriorate into madness. A baby goes missing, the family’s pet goat exhibits signs of calculated evil, and the eldest daughter, Thomasin (Anya Taylor-Joy) is blamed for it all—the practitioner of witchcraft. 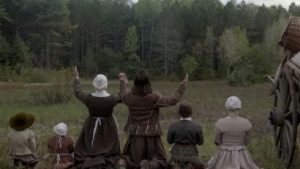 Of course, she’s at fault for none of it. The true culprit of this family’s misfortune is not a literal witch but the mere idea of one. Whether or not they’re really being toyed with by a devilish presence in the woods (and they certainly seem to be, though the film is just ambivalent enough to allow for an interpretation centered more on hysteria) is beside the point. All it takes for their quaint family dynamic to completely implode is the word “witch.”

Painstakingly researched, the film is uncanny in its period detail, which makes the act of sympathizing with the miseries of a family four centuries removed from now much easier. What little dialogue there is is spoken in Early Modern English—close enough to today’s version that we can understand what they’re saying, but just archaic enough that we actually have to pay attention to what the characters say. This is the rare horror film where words matter. 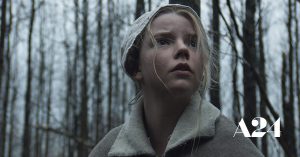 The importance of the dialogue is helped because there’s not much of it, and in between the few stern biblical rebukes and frantic scary-movie wails are extended shots of the tree line, and close-ups of the goat’s face. In those eyes, those goofy little eyes, we see what we all know deep down to be true about goats—that they’re wicked creatures who do the devil’s bidding.

The Witch is seemingly paradoxical: at once restrained in tone but also unshrinking in its depiction of witchcraft- we see exactly what the witch is up to out in the deep dark woods. The film expertly plays on the near-universal human fear of the forest, the irrational but unyielding feeling that something unnatural is contained within. At a time when electricity didn’t exist, the woods here are savagely, oppressively dark. It’s easy to see how the humans turn on each other. 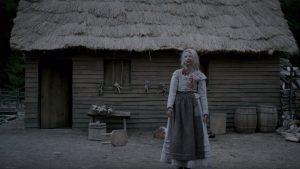 This story is about dread in a pure, religious sense. It’s unclear why the family was banished from their settlement at the film’s start (all we are told is that there was some sort of disagreement over interpreting the New Testament, and that the father of the family was too “prideful”) but we learn that they are devout in their Puritanism, perhaps too devout even for the community they belonged to.

French diplomat and historian Alexis de Tocqueville visited nascent America in the nineteenth century and concluded that much of its democratic spirit was derived from its Puritan founding by middle-class English castoffs seeking religious autonomy. The New England Puritans, for instance, greatly valued education, and most colonies mandated child literacy. 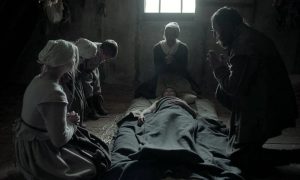 Of course, that didn’t mean they valued gender equality. And that’s where Eggers’ film becomes a lot more than just a stylish, original compelling horror story. When it first came out, Wired called it “wildly feminist” and Marie Claire argued it constituted a “high-powered feminist manifesto.” Eggers admitted that while perhaps a happy accident, those readings of his film were largely correct. In recent years, feminists have re-appropriated the word ”witch” as a badge of honor, and witchcraft has caught on as a spiritual lifestyle choice for some liberal millennials.

Implicit in the family’s suspicion of teenage Thomasin is a profound fear of powerful, independent women. They attempt to herd her (not unlike the goat) and guard her from the world until the moment she becomes more of a burden to them than her presence is worth. Her parents float the idea of sending (or possibly selling) her to a new family, making her someone else’s problem, someone else’s rebellion to squash. 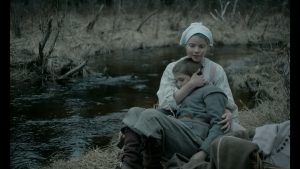 The Witch is thus about understanding one’s agency and exerting it for the first time. We know Thomasin is innocent, just as all the accused “witches” at Salem or in Arthur Miller’s The Crucible were innocent of their charges, but try telling that to a mother whose newborn son inexplicably vanished while in the care of her eldest daughter.

By the end of the film—and here we return to that climactic scene I mentioned—Thomasin cleverly subverts the female empowerment narrative that we thought The Witch was building toward. She makes a choice that upon first viewing I believed to be an act of rebellion—her first truly independent act in a lifetime of being treated as an unwanted other.

But after watching it again, it’s clear she had no choice at all. The situation she finds herself in, as a suspected witch who would be ostracized (if not worse) in any community she joined, leaves her with no options but to make a deal with the devil. The Witch looks at the uniquely female anxiety of living in a misogynist time, and in the midst of the #MeToo era, it still resonates.