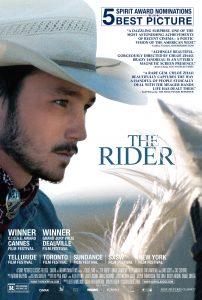 After a tragic riding accident, Brady (Brady Jandreau), once a rising star of the rodeo circuit, is warned that his competition days are over.  Back home, Brady finds himself wondering what he has to live for when he can no longer do what gives him a sense of purpose; to ride and compete.  In an attempt to regain control of his fate, Brady undertakes a search for a new identity and tries to redefine his idea of what it means to be a man in the heartland of America.

While making her first film “Songs My Brother Taught Me” on the Pine Ridge Indian Reservation in 2013, Chloe Zhao got to know a group of Lakota cowboys.  Despite the fair complexion some of them have, they were born and raised on the reservation and are both Ogalala Lakota Sioux and bonafide cowboys.  They wear feathers in their hats to honor their Lakota ancestry- Indian cowboy- a true American contradiction.  Chloe was fascinated with them and ended up casting some of them as supporting actors in the film.

In 2015, while visiting a ranch on Pine Ridge Reservation, Chloe met a twenty year old Lakota boy named Brady Jandreau.  Brady is a member of the Lower Brule Sioux Tribe and currently resides on Pine Ridge.  He is a saddle bronc rider and a horse trainer, who lives like a man of the land.  He hunts on horseback, fishes in the White River, spends most of his days working with wild horses, breaking and training them until they are fit for selling.  Like a fish to water, Brady seems to understand every movement of the horse, as if they are locked in some kind of telepathic dance routine.  One giving way to the other, until slowly and gently, a trust is formed.  He’s been doing it since he was eight years old, and it is truly remarkable to observe.  Chloe was immediately drawn to him and started forming ideas for a film about him. 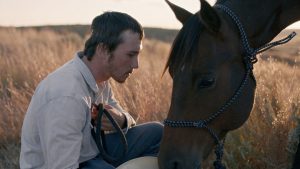 On April 1st 2016, Brady entered the PRCE rodeo in Fargo, North Dakota.  He was to compete in the “Saddle Bronc” section and felt confident after a string of successful rides during the season.  But that night Brady was thrown off.  The bucking horse stomped on his head and near fatally cracked his skull.  Brady’s brain bled internally.  He had a seizure and fell into a three day coma.

Brady now has a metal plate in his head, and suffers from other health issues associated with a severe traumatic brain injury.  The doctors advised him never to ride again.  If he hits his head again, it could be fatal.  But Brady was back breaking wild horses in no time.  Chloe visited him and they talked about why he is risking his life.

“Last month, we had to shoot Apollo (a horse Brady was trainging) when he got his leg tangled in a barbed wire fence,” Brady told Chloe. “If an animal around here gets hurt like I did, they’ll get put down.  I was only kept alive because I am human and that is not enough.  I’m useless if I can’t do what I was born to do.”

Beyond the financial hardships that came with the injury, Brady’s response made Chloe think about the psychological impact these injuries have on young me like him- what it must be like to live in the heartland of America, unable to match up to the ideal image of a cowboy, an image these young men have tried to live up to their whole lives.  Chloe decided to make the film about Brady’s struggles, both physically and emotionally, as he comes to terms with his injury.

As Chloe listened to Brady reflecting on his life the first few months after the accident, she cast Brady and his friends and family to play fictionalized versions of themselves in the film.  Everyone in the film came from around the reservation.  This includes Brady’s father Tim, an old – school cowboy who taught Brady all he knows.  His bright and spirited little sister, Lilly, who has Asperger’s Syndrome, and expresses herself completely free of inhibitions.  His rodeo friends, all sharing in Brady’s hopes, fears and dreams, and one of his best friends, Lane, who is completely paralyzed after and accident that ended his promising bull riding career. 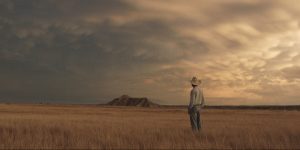 “Working with Brady and Lane in a scene was one of the most humbling and inspiring moments of my life.” Chloe reflects, ” We started production on September 3, 2016.  The five week filming mainly took place on the reservation and in the surrounding Badlands.  Brady, who works as a professional horse trainer, trained horses for the first half of each day in order to have them ready for a horse sale.  So we were able to capture a lot of authentic footage of Brady training and interacting with horses, while fully taking advantage of the magical South Dakota sunset.  We worked with a small film crew, filming in people’s homes, real locations and events.  This is my second collaboration with cinematographer Joshua James Richards.  We strived to capture moments in an organic and cinematic way in order to further integrate a complete sense of reality into the narrative.  Through Brady’s journey, both on and off the screen, I hope to explore our culture of masculinity and to offer a more nuanced version of the classic American cowboy.  I also want to offer an authentic portrait of the rough, honest, and beautiful American heartland that I deeply love and respect.”