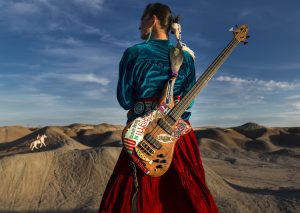 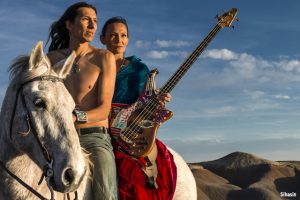 Dine’ word- to think with hope and assurance. The process of making critical affirmative action of thinking, planning, learning, becoming experienced and confident to adapt.

Brother and sister Jeneda and Clayson Benally, formerly of Blackfire with brother Klee Benally, from the Navajo (Dine’) Nation in Northern Arizona have created their own unique brand of music with bass and drums. They grew up protesting the environmental degradation and inhumane acts of cultural genocide against their traditional way of life. Their music reflects hope for equality, healthy and respectful communities and social and environmental justice.

Clayson, Jeneda and Klee Benally grew up on Black Mesa in northern Arizona, a place at the center of a land dispute between a coal mining company and the Navajo and Hopi tribes. The children of a traditional healer, they grew up protesting the coal mine and couldn’t ignore what they saw as oppression and abuse of power. So they formed a punk rock group in the early ’90s called Blackfire. 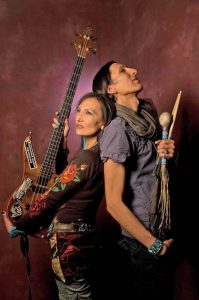 “There was a lot of anger,” Clayson recalls. Starting the band and performing was a way of “channeling that anger and frustration and putting it into something positive, as well.”

Now, about two decades later, Klee Benally has become an activist, and Jeneda and Clayson have formed a new band called Sihasin, which means “hope” in the Navajo language.

“With Sihasin, everything is kind of reversed, the energy,” says Clayson. Unlike Blackfire’s aim, he says, the goal with Sihasin is to “make people dance. Let’s make people move and feel good, you know — not just smash stuff.”