Be sure to read our Ticket Info before purchasing your tickets.
We're sorry, but all tickets sales have ended because the event is expired. 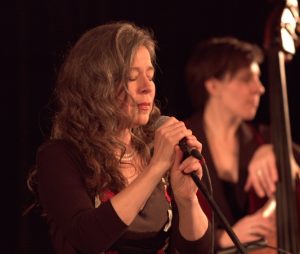 Sara Illsley and Friends will be performing in Cortez, Colorado, at the Sunflower Theater on November 16. Their concert ‘About Love, Life and Death’ is colored by traditional and new music in Spanish and Portuguese with a decidedly jazzy bent. Some of these songs will be familiar to the audience and some will be a discovery. This concert embraces the circles of life and also touches a little of the traditions of The Day of the Dead (as this is a tradition very dear to Sara’s heart). This band tours with the intention of connecting people through music and opening their hearts to different sounds and languages.

This group believes strongly in giving back to the communities where they perform by selecting an organization to support. This time they have chosen to fundraise for Renew, the domestic and sexual violence crisis hotline. Half of the proceeds from the concert will benefit this organization to help with costs for the wonderful work they do in the community.

About Sara Illsley and Friends

Vocalist Sara Illsley was born and raised in Mexico. Her musical journey started with performing children’s music. For 12 years, she recorded multiple CDs with several groups and toured many plazas and important theaters in Mexico and other countries, as well as studying opera in music school. In 2003 and 2005, she was invited to record the music of one of the most important Latin children’s music composers: Francisco Gabilondo Soler, aka Cri-Cri. From this work came a DVD that has sold almost 500,000 copies in multiple editions and versions.

One of the things that has always defined her as an artist is her deep commitment to social justice and human rights. She has recorded multiple songs that show this commitment.
While on stage, Sara will be singing in Spanish and Portuguese, a true treat to transport you worldwide.

Sara Illsley will be joined by her accomplished musical friends: Elle Rio on bass, Ryan McCurry on piano, Clay Lowder on percussion, and Ted Moore on drums.

More info about Sara Illsley and her music can be found at https://www.saraillsleymexartist.com/