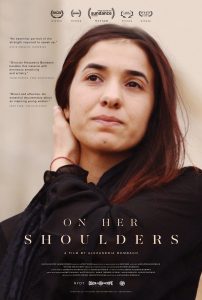 Twenty-three-year-old Nadia Murad’s life is a dizzying array of exhausting undertakings—from giving testimony before the U.N. to visiting refugee camps to soul-bearing media interviews and one-on-one meetings with top government officials. With deep compassion and a formal precision and elegance that matches Nadia’s calm and steely demeanor, filmmaker Alexandria Bombach follows this strong-willed young woman, who survived the 2014 genocide of the Yazidis in Northern Iraq and escaped the hands of ISIS to become a relentless beacon of hope for her people, even when at times she longs to lay aside this monumental burden and simply have an ordinary life

Nadia is a human rights activist. She is a nominee for the Nobel Peace Prize, the recipient of the Vaclav Havel Human Rights Prize and the Sakharov Prize, and the UN’s first Goodwill Ambassador for the Dignity of Survivors of Human Trafficking. She has also received the Clinton Global Citizen Award, Peace Prize from the United Nations Association of Spain, and was named 2016 Woman of the Year by Glamour Magazine. Since 2015, Nadia has been working to bring ISIS before the International Criminal Court on charges of genocide and crimes against humanity.