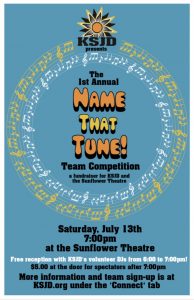 Get your team of up to four people together to compete in KSJD’s 1st Annual Name That Tune team competition!

The championship team will win a trophy, KSJD t-shirts and stickers, and four tickets to Sunflower Theatre events.