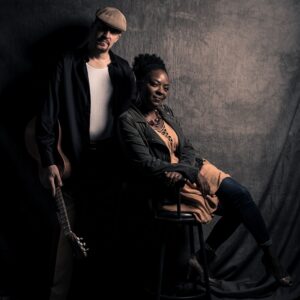 Two-time Blue Music Award nominee, Missy Andersen is joined by guitarist/bandleader/husband, Heine Andersen for another tour of the Southwest in February 2017.  Besides a heavy performing schedule with their band, the tenacious twosome also performs as a duo which showcases the couple’s individual and combined talents. In the absence of other instruments, listeners find a greater appreciation for Missy’s gospel-tinged vocals and Heine’s ‘history of the blues’ inspired guitar work.

A charismatic performer known for her expressive and earthy vocals, Missy Andersen received the coveted Blues Music Award nomination for Soul Blues Female Artist in 2015 and then again in 2016.  Raised in Queens, NY, Missy grew up singing along to the blues, soul, and gospel music of her parents and grandparents. These influences are evident whether it’s a slow, soul ballad or a belting blues.

Originally from the country of Denmark, Heine Andersen has toured extensively in both Europe and North America, playing some of the most prestigious stages and festivals including Montreux Jazz Fest, Notodden Blues Festival, and Piazza Blues Festival over his 25 years blues career.