The Sunflower Theatre is excited to welcome back 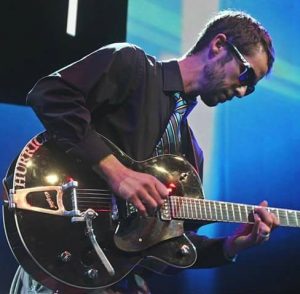 One hundred years ago Hurricane Jake Heath would have jumped freight trains or stowed away on tramp steamers.  In these days of the jet plane and hybrids, he has become a national award winning bluesman gaining in notoriety with his latest project “Hurricane Jake’s One Man Band”.  In his one man band he plays the drums, the guitar, and sings with influences of swing, jazz, rockabilly, and of course the blues.  He started playing the guitar at age 10, and by the age of 13 began playing live shows with his first band Blue Coyote.  Music is his passion, and he makes that clear when on the stage.

From Huntington Beach California, Harlis Sweetwater, as a singer /guitarist/ songwriter and frontman, has shared the stage with everyone from Jimmie Vaughan, ZZ Top, Los Lobos, Robert Randolph & the Family Band, Everlast, and Brian Setzer to R&B/Blues legends Etta James, James Cotton, and Wilson Pickett to name a few.

He has been called “the best singer in any genre” by music critic Robert Kinsler of the OC Register, While SugarBuzz Magazine had this to say: “From the heart, Harlis Sweetwater,you know instantly the real deal is upon you. This man knows the blues.”

Harlis first arrived on the scene with his band Barrelhouse O.C. and the group came into its own in the early 1990s. A favorite of L.A. and Orange County CA music critics, the band possessed a deep passion for the music of Otis Redding. It was the groups mission to bring Soul music to the masses behind the orange curtain. With a 3 piece horn section, piano, 2 guitars, bass and drums, and Harlis’s broad and gravely vocals at the helm, the band was like an explosive soul revue. The band quickly became known for their highly entertaining shows and authentic southern soul sound. After 3 albums and an EP they began feeling like they had run their course and called it quits in 2001. After the break up, Harlis experimented with other styles and genres, but he longed to get back to the music that inspired him.

He Formed the Harlis Sweetwater Band in 2012 to get back to the Blues/Soul and Americana music he loves. He enlisted fellow musicians Jimmy Sena on Drums and Jason Holser playing Bass; both with extensive recording and performing experience, to lay down a solid foundation of groove for His wild, bluesy & intense guitar playing and husky soulful voice. The group often times plays with the 3 piece horn section of Geoff Yeaton (Saxophone) , Jed Thurkettle (Trombone) and Ken Effrem Shaw (Trumpet) known as the “Voodoo Horns”, two of whom are former Barrelhouse members.

The band released “Lights Goin’ Down” in Oct. 2012, to rave reviews. Gary Schwind of the Examiner.com stated “This Album Is Brilliant.” and Incognito Magazine wrote in its review of the album “If you want some music you can feel and not just hear, check out this band.”  The groups second album “Put It In Dirt” released May 2014, debuted on iTunes Top 200 Best Selling Blues albums at #106 and reached #30 and continues to receive rave reviews from all over the world.