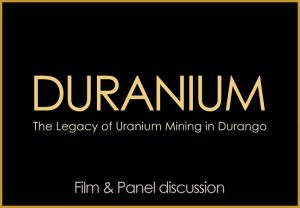 Free ~ $5 donation requested at the door

America’s explosive successes in peace and war were fueled by the radioactive wealth from the Colorado Plateau. The mineral carnotite was a “Pandora’s rock” of scientific, medical, industrial, and military power for 20th Century America with its unleashed resources of radium, vanadium, and uranium. Even though the energetic and frenetic mining and refining of uranium ore in Western Colorado has mostly ceased, its remaining trace elements of memory and controversy still radiate from Uravan and Grand Junction throughout the state, the nation, and the world. 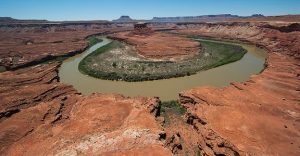 “This project has proven itself to be a very innovative and ambitious endeavor,” said Stacey Sotosky, an assistant professor who teaches digital video production at Fort Lewis. “I’m very proud of the work we’ve accomplished in the last seven weeks. It’s been a very unique classroom experience for all.”

Sotosky said her class of about 16 students experienced a new process in the making of “Duranium: The Legacy of Uranium Mining in Durango.”

“There were twists and turns along the way, and we adapted to the story as it evolved,” Sotosky said.

On top of the guidance by Sotosky, students also had the benefit of learning from award-winning documentary flimmaker Carol Fleisher, who is based in Durango and has had her work appear on PBS, NBC and National Geographic, among others. 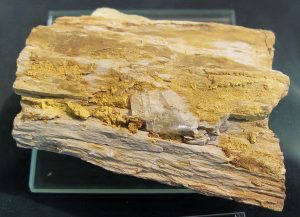 The film is 10 minutes long.

There will be a Q&A following the film with Stacey Sotosky and some of the student filmmakers.

Following the Q&A, there will be an interview with Professor Brad Clark about his forthcoming book

Clark earned a Ph.D. in Political Science from Colorado State University in 2007 with a focus on American Politics, Public Administration and Policy, U.S. Environmental Politics and Western U.S. Water Policy. His Ph.D. dissertation was titled “River Restoration and Dam Removal in the American West: An Examination of Policy Change across Political Jurisdictions.”

He is a member of the Advisory Consortium and Selection Committee for the Bert and Phyllis Lamb Prize in Political Science, served as Chair of the Panel on “Politics and Work,” at the Annual Conference of the Western Political Science Association in 2016, and has served as a peer reviewer for the Political Research Quarterly since 2006. Clark was nominated for Fort Lewis College’s Alice Admire Outstanding Teaching Award in 2016, received the Charles Redd Award for Best Paper on the American West at the Annual meeting of the Western Political Science Association in 2013, and was awarded a Faculty Development Grant for Traditional Scholarship in 2011.