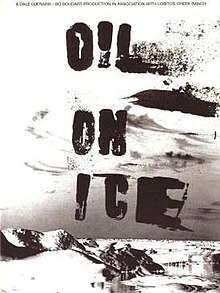 Oil on Ice is a one-hour television documentary/WebDVD that examines the the battle over oil development within the Arctic National Wildlife Refuge. This is a classic struggle in a stunning place, featuring the dramatic wildlife that adapted to this environment and the cultures of the Gwich’in Athabascan Indians and Inupiat Eskimos that rely on this wildlife for their subsistence.

The film and WebDVD project exposes the risks of oil extraction in this extreme environment. What happens if another oil spill occurs on the coastal plain or under an ice-covered Beaufort Sea? How can one rationalize development of irreplaceable wilderness areas or ignore the cultural survival of indigenous populations? Already, Eskimo residents and leaders of the North Slope Borough are criticizing the impacts of oil development to their lands and their seas. Gwich’in Indian residents of Arctic Village, on the southern boundary of the Arctic Wildlife Refuge, fear their community’s caribou hunting will be severely impacted by oil development in the Refuge.

This project will also examine the effects that improved fuel efficiency standards for vehicles and development of alternative sources of energy will have on this nation’s oil consumption. The issue of oil extraction from the Arctic National Wildlife Refuge brings to a sharp focus the broader debate over energy conservation vs. unbridled consumption. It also dramatizes the choice between technologies based on fossil fuels and those that draw upon renewable, efficient, and non-polluting energy resources. Humanity does not need to destroy an irreplaceable wilderness in order to generate power, heat homes, and travel about. The new paradigm is a mode of living with the Earth rather than extracting from the Earth.