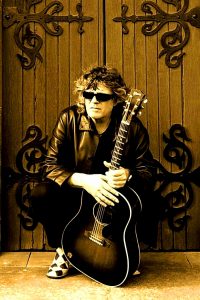 Ready for a unique and talented take on a wide range of musical traditions? Claude Bourbon is known throughout Europe and America for amazing guitar performances that take blues, Spanish, and Middle Eastern stylings into uncharted territories.

Claude’s inimitable style incorporates all five digits on each hand dancing independently but in unison, plucking, picking and strumming at such speed and precision that his fingers often seem to melt into a blur.

Claude Bourbon weaved his songs through the audience as if on a journey through life taking in different flavours of Europe and beyond. It is very hard to describe the almost endless amalgam of different influences in Claude’s playing, all melting into each other, as he moves from classical openings, across a whole continent of cultural roots, from the Balearic’s to the Balkans, and then across to the Mississippi Delta, and shoehorned into all that is music that would not have been out of place in the courts of Emperors and Kings.

Now based in the UK, some of this guitarists’ influences allow us a fascinating insight into this remarkable musician; Paco De Lucia: Deep Purple’s Richie Blackmore; Joaquin Rodrigo; JJ Cale; JS Bach….

“ Claude Bourbon is a unique figure today… his playing is almost indescribable“ – The Hook, Charlottesville, USA 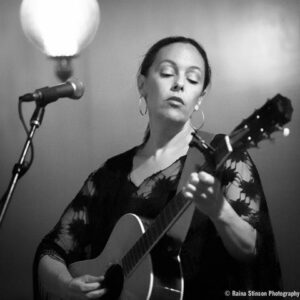 “Her songs are beautifully crafted, sometimes bittersweet and sometimes hopeful, but ever easy and melodic with soulful and savvy lyrics” – Chicago Tribune 5/2014

Songstress, Jill Cohn’s most recent release, “Heartstrings Touching Ground” was produced by Grammy Award Winning Producer Malcolm Burn, who has credits with Bob Dylan, Daniel Lanois and is best known for his production on “Red Dirt Girl”, by EmmyLou Harris.   After hearing Jill’s song, “Yellow Rose”  Burns invited the Seattle Songstress to record with him in his Kingston NY studio.  This collaboration has resulted in a stunning new collection of deeply personal songs with a universal message of hope.

Fans of this independent songwriter have heralded “Heartstrings” as the “summum bonum of all her works”.  She spent most of 2015 – 2017 on tour in support of this release.  The album also found its way onto independent and Americana Radio and had vibrant airplay nationwide for nearly the whole year.  It spent over 30 weeks on the Americana Radio Chart and received many positive print reviews in towns where Cohn performed.

An evening with Jill Cohn has been described as an intimate evening with a good friend, and the 11th offering from Cohn, “Heartstrings Touching Ground” is continuing to have attention from radio and audience’s nationwide with NPR Nebraska and South Dakota both featuring in depth State-wide interviews with the singer earlier this year.

A full-time musician since 1999, Cohn has released nine critically-acclaimed independent releases, has gained notoriety with her songs placed in popular TV shows and continues making her live shows the centerpiece of her musical endeavors. In addition to being an endorsee of TAYLOR GUITARS and ELIXIR Strings since 2001, she was a top five finalist in the Lilith Fair Talent Search and has opened for a long list of many well-known artists, but stand-outs include:  David Bromberg, Cheryl Wheeler, Vonda Shepard, Loudon Wainwright, Dave Matthews and Jewel.