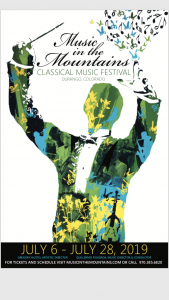 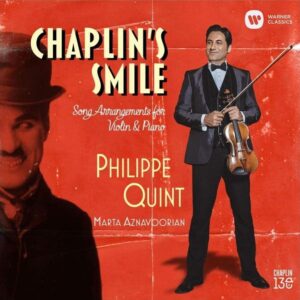 Who knew that the famous silent film actor was an amazing composer who wrote the soundtracks for many of his films?! Straight from the charismatic Philippe Quint’s recently released album, hear enchanting violin and piano arrangements of some of Chaplin’s most beautiful and well-known music: “Eternally” from Limelight, “Smile” from Modern Times, “Weeping Willows,” music from City Lights, and more!

Tickets available at Music In The Mountains

Multi Grammy Award nominee Violinist Philippe Quint has established himself as one of the leading violinists of his generation. “Truly phenomenal” is how BBC Music Magazine recently described him. Mr. Quint’s commanding technique and musical curiosity has led him to reimagine traditional works, rediscover neglected repertoire and continue his journey presenting new works of the most outstanding composers of today. Constantly in demand, he regularly appears at venues ranging from the Gewandhaus in Leipzig to Carnegie Hall in New York, appearing in recent seasons at the most prestigious festivals including Verbier, Colmar, Hollywood Bowl and Dresden Festspiele.

Named Artist-in-Association for 2018/1019 season by Utah Symphony which will include two weeks of performances with the orchestra and a recording for Hyperion label, other highlights of Mr. Quint’s forthcoming season will include a special release of new arrangements of works by Charlie Chaplin for Warner Classics Label, debut with Bilbao Orkestra Sinfonikoa, Moscow debut with the National Philharmonic of Russia conducted by Maestro Vladimir Spivakov and taking the Chaplin Project on tour with recitals in Los Angeles, New York, Washington, Boston, Pittsburgh, Berlin, London, Utrecht  and Bilbao.

In the 2016/17 season at the invitation of Maestro Vladimir Spivakov, Philippe opened the 28th edition of the Colmar Festival dedicated to Jascha Heifetz with Tugan Sokhiev conducting Orchestre National du Capitole de Toulouse in a performance of Korngold Violin Concerto.

​Winner of “Ambassador of Arts” award in 2014 presented to Philippe Quint by Brownstone and Gateway Organizations at the United Nations in March of 2014, his 2015-2016 season highlights included debuts with Seattle Symphony with Ludovic Morlot, Milwaukee Symphony with Edo de Waart, Kansas Symphony with Michael Stern, Vancouver Symphony with James Gaffigan, returns to San Diego Symphony with Jahja Ling and Indianapolis Symphony with Krzysztof Urbanski.

​In the summer 2015, he hosted the 2nd Annual Benefit “Philippe Quint & Friends” at Carnegie’s Zankel Hall presented by Russian American Foundation. The first benefit concert took place at the New York Times Center in 2014 and featured John Corigliano, Joshua Bell, Michael Bacon, J.Ralph and Emily Bergl. Along with Lou Diamond Phillips, Darren Criss and Lea Salonga, Philippe appeared at the Kennedy Center’s “After the Storm” Benefit Concert for Philippines. Later that summer he also debuted at the Hollywood Bowl with the Los Angeles Philharmonic as a part of a special “Joshua Bell & Friends” concert.

​Quint’s live performances and interviews have been broadcast on television by CBS, CNN, ABC, BBC World News, NBC, Reuters, Bloomberg TV, as well as by radio stations nationwide including NPR, WNYC and WQXR. His recordings have received multiple “Editor’s Choice” selections in Gramophone, The Strad, Strings, and the Daily Telegraph. His remarkable degree of lyricism, poetry and impeccable virtuosity has gripped the eyes and ears of audiences in Asia, Australia, Latin America, Africa, Europe and the U.S. with what The Times (London) describes as his “bravura technique, and unflagging energy.”

​Born in Leningrad, Soviet Union (now St. Petersburg, Russia), Philippe Quint studied at the Moscow’s Special Music School for the Gifted with the famed Russian violinist Andrei Korsakov, and made his orchestral debut at the age of nine. After moving to the United States, he earned both Bachelor’s and Master’s degrees from the Juilliard School. His distinguished pedagogues and mentors included Dorothy Delay, Cho-Liang Lin, Masao Kawasaki, Isaac Stern, Itzhak Perlman, Arnold Steinhardt and Felix Galimir.

​The Chicago Tribune proclaimed, “Here is a fiddle virtuoso whose many awards are fully justified by the brilliance of his playing.” Among his many honors, Quint was the winner of the Juilliard Competition and Career Grant Recipient of Salon de Virtuosi, Bagby and Clarisse Kampel Foundations.

Multi Grammy nominated artist Marta Aznavoorian has performed to critical acclaim throughout the world as orchestral soloist, recitalist, chamber musician and educator.  A Chicago native, she has performed in her hometowns most prestigious venues and tours extensively throughout the world.  She made her professional debut at the age of 13 performing Mozart Piano Concerto No 24 in C minor K.491 with the Chicago Symphony Orchestra at Symphony Center in four concerts of their series.  She has won over audiences appearing as soloist with orchestras internationally including the Sydney Symphony Orchestra, the Sydney Conservatory Orchestra, San Angelo Symphony, San Diego Symphony, and the New World Symphony which resulted from a personal invitation from Michael Tilson Thomas who also was her conductor.

Aznavoorian has worked with such renowned conductors such as the Late Sir George Solti, Michael Tilson Thomas, Lukas Foss, Henry Mazer, Francesco Milioto, Kirk Muspratt among others. She has won numerous awards, including first prize at the Stravinsky in the Stravinsky International Competition where she was also lauded the special prize for best interpretation for the commissioned contemporary work.  As a recipient of the 1990 Level 1 award in the National Foundation for the Arts Recognition and Talent search, Ms. Aznavoorian became a Presidential Scholar and was invited to the White House where she met former President George W. Bush and performed as soloist at the Kennedy Center in Washington, D.C.

Ms. Aznavoorian is founding member of the Lincoln Trio which Fanfare Magazine has labeled as “one of the hottest young trios in the business”.  The Grammy Nominated trio tours regularly thoughout the world and just celebrated their most resent CD release from Cedille Records called Trios from our Homelands which was also nominated for a Grammy in the best small ensemble/chamber music performance in 2017.

In strong demand as a chamber musician, Ms. Aznavoorian has worked with many artists all over the world and has frequented many festivals including Tanglewood Festival, Aspen Music Festival, Caramoor Festival, Hornby Island, Green Lake Festival and she will be making her 9th straight season appearance at the Ravinia Festival in 2017.
A champion and lover of new music, Ms. Aznavoorian has worked with the worlds leading composers including William Bolcom, Osvaldo Golijov, Jennifer Higdon, Shulamit Ran, Augusta Read Thomas, Joan Tower, Lera Auerbach, Pierre Jalbert, Stacy Garrop, Laura Schewendinger,  and continues to collaborate with several of the most innovative composers of our time.   In 2017 she was awarded the “Standing Ovation Alumni Legend Award”  for her outstanding outreach, performance and teaching mentoring to her hometown community in Chicago.

A student of the renowned teacher  Menahem Pressler,  Aznavoorian received her Bachelor  degree and Artist Diploma  at Indiana University and her Masters Degree from New England Conservatory where she studied with the late Patricia Zander.  A passionate teacher and educator, Aznavoorian has  taught and given masterclasses at Universities throughout the United States and abroad, and is on faculty at the Music Institute of Chicago,  and Piano and Chamber Music  faculty at DePaul University School of Music.  Aznavoorian records for Naxos,  ARTEC label, Cedille Records and has just recently released  Violin and Piano arrangements of the Music of Charlie Chaplin under the Warner Classics and Erato label.
Marta Aznavoorian is a Steinway Artist.