The Blue Desert Tour brings the healing powers of jazz music to the Four Corners for an evening of soulful jams in downtown Cortez with three award-winning indigenous-led quartets, D’DAT, Ii-yat Collective, and the Rico Jones Quartet. The Blue Desert Tour is made possible by a grant from Chamber Music America. 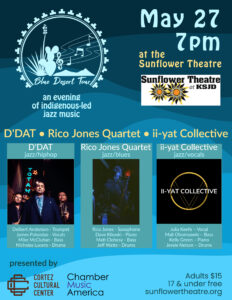 The ii-yat collective is an indigenous-led all-female jazz quartet inspired by the radical idea of a healed planet, a healed woman, and a culture where the nurturer is revered rather than extinguished. This collective brings the healing power of jazz together with the healing power of sacred, ancestral songs, encouraging women to release their good medicine into the world through music. If women are healed, all people are better.
Ii-yat (pronounced “eye-yet”) means Woman in the traditional language of the Nimiipuu (Nez Perce) people. The destruction of Mother Earth is directly connected to the brutalization and destruction of women. The life-giving powers are being silenced at staggering rates, with women experiencing domestic violence and homicide, and Indigenous women in particular at higher rates than any other race per capita. Healing our Earth begins with healing the Sacred Feminine and honoring the women around us, the women who have gone on before us, and those women who have yet to be with us.
Julia Keefe – Vocal
Mali Obomsawin – Bass
Kelly Green – Piano
Jessie Nelson – Drums

Vincent Herring says “Rico [Jones] Is one of the few original voices emerging. His musicianship and passion have forged to create an original voice we will joyfully be hearing more from in the future!”
Rico Jones is steadily becoming one of the top young saxophonists of his generation. A Colorado native, Rico grew up in Denver performing under the guidance of local artists such as Paul Romaine, Greg Gisbert, Eric Gunnison, Art Lande, Brad Goode, and Vlad Girshevich. Blues and Jazz became a primary mode of expression for Jones and his ensembles.
He has performed as a leader with notable artists such as Dave Kikoski, Jeff “Tain” Watts, Matt Clohesy, Yasushi Nakimura, Ari Hoenig, Lage Lund, and Kush Abaday, Joe Martin, Colin Stranahan, Rick Rosato, Rich Perry, Steven Feifke and many others.
In 2019 Rico Jones was awarded 1st prize in the Vandoren Emerging Artist competition and was chosen to take part in the prestigious Betty Carter Jazz Ahead program at the Kennedy Center, and the 2019 JAS Aspen workshop. In 2020 Rico competed in the first-ever Rudin Jazz Championship at Lincoln Center under the direction of Jon Faddis. Jones was also placed as a finalist in the North American Saxophone competition.
.
Rico and two of his ensembles have received a total of 4 Downbeat awards for the 2020 edition of their SDA program, including “Jazz Soloist”, “Small Jazz Ensemble,” and two awards in the “Latin Jazz” category.
He graduated from his undergrad at the Manhattan School of Music, receiving the William H. Borden Award for outstanding achievement in jazz in May of  2020, and was granted a full scholarship to their master’s program. In 2021 Rico Received two more DBA awards from Downbeat Magazine, “Jazz Soloist” and “Jazz Arrangement”.
Rico Jones – Saxophone
Dave Kikoski – Piano
Matt Clohesy – Bass
Jeff Watts – Drums