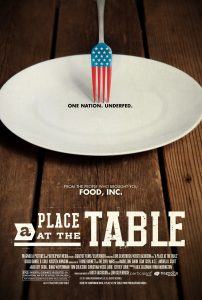 Come for appetizers and cider at 6:30pm

50 Million Americans—1 in 4 children—don’t know where their next meal is coming from. A Place at the Table tells the powerful stories of three such Americans, who maintain their dignity even as they struggle just to eat. In a riveting journey that will change forever how you think about the hungry, A Place at the Table shows how the issue could be solved forever, once the American public decides—as they have in the past—that ending hunger is in the best interests of us all.

The film will be followed by a panel discussion on food accessibility impacts Montezuma County and the Four Corners.  Panelists to be announced.